This was a pretty exciting gig for me, the boys playing in my town?! I had to get tickets! Recently saw Whitesnake in Bournemouth and while it was great, the traveling is a pain, so just turning up and going home right away was a very nice change.

This was the third time I had seen the boys, the first was during their last tour back in 2006 at the NEC. Sat pretty far back and to the side was kinda disappointing, but not bad for a first gig. I kept up to date on all things TD during the 5 year gap, from loving Hot Leg and Stone Gods (What ever did happen to album 2?) and hunting down rare tracks/live versions etc.

As with everyone, I was ecstatic when they reformed, and swore I would go to as many shows as possible. I was always disappointed I never got to see Frankie on stage. So when I heard they would be playing 3 warm up shows in small venues, I jumped at the chance and trekked all the way to London for what was an unforgettable gig.

First up was Crown Jewel Defense, whose drummer and bassist passed me in the line outside many a time and I thought they were roadies. Sorry Lads! Got quite the shock when the roadies picked up instruments and began playing them…

My friend Karl had been to the gig in Brighton and said the lead singer used five different guitars for five songs, alright for some! They kept the crowd entertained pretty well. Some great foot tapping/head nodding american stadium rock songs. They had stage presence and sounded rather tight, i’d pay some money to see them again. I was expecting them to be Max Raptor bad, who now always remind me of a silent crowd who then all sing along to “My Sharona” as soon as they have left the stage.

Might i add that the support for 2006 (The Ark) turned out to be one of my favorite bands, so the pretty constant mention of Foxy Shazam by Justin got me excited but the quick YouTube search didn’t fill me with hope, pretty average songs and weird videos… But oh how I was wrong!

You MUST go see Foxy Shazam live,I imagine their pre-show rituals involve snorting cocaine and caffeine. Before I knew what was going on, the front of the stage was being swarmed by press as the lead singer, Eric, rolled across the stage and threw the mic and himself around the stage.

I admit, I didn’t pay much attention to the songs, I was too busy trying not to miss anything any of the band members were doing, pretty surreal to see a trumpet player dive between the lead guitarists legs and turn your head to see the keyboardist playing with his feet while standing on his instrument. But the tour de force has to be Eric leapfrogging onto the shoulders of the soloing lead guitarist. I can’t begin to imagine how many guitars they’ve knackered getting that right. 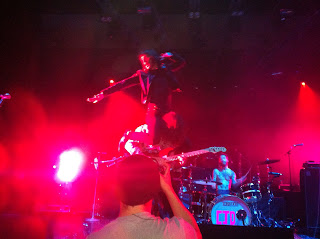 Was pretty damn amusing seeing the press trying to keep up with him to take a picture.

But The Darkness were the main reason I was here, and they did not disappoint. Granted I didn’t think it was as good as the London show (thanks to the crowd, which Justin picked up on half way through: “Why don’t we have some fucking fun?”)

There was a touching moment where the two brothers and Frankie played side by side, it’s so great to see them enjoying themselves once again, long may it last. 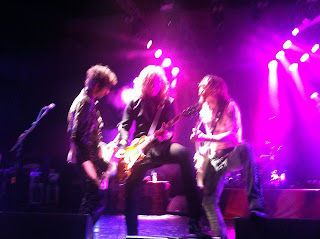 Opening with Arrival (what else?!) and kicking straight into Black Shuck, the first few songs seemed to fly by with little crowd interaction. Though saying that, there were some throw backs to yester-year that were alarmingly missing from the earlier shows, things like “Gimmie a D!… Gimmie an “Arkness!” and thumbs!
That continued to the costumes. Dan looked out of place without his Thin Lizzy t-shirt and no cat suit for Justin! Good thing Dan changed for the encore, as did Justin various times throughout the gig to reveal some famous cat suits. These little things made the gig for me, the little nods to the older darklings complete with Best Of Me solo behind the head. 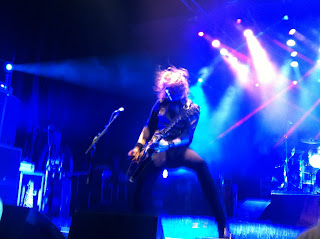 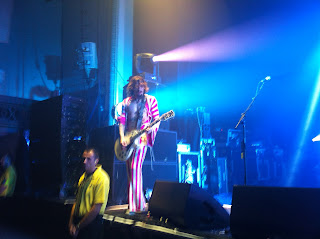 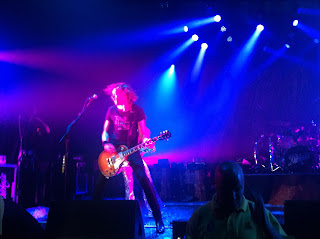 My only gripe was the dry ice. Got used a bit too much, which I think Justin agreed with as he hurried off to the side to tell someone he couldn’t see his pedal. We lost the band at one point… Eric would have broken his neck if he had a dry ice machine. 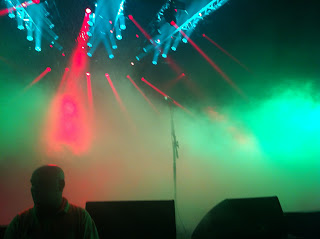 Justin sang a beautiful solo acoustic rendition of Holding My Own proving, if it was needed, that along with balls out rock, he can write and perform a timeless ballad. Tie Your Mother Down would have been a very very nice surprise if I hadn’t seen it already days before 🙁 Hearing that they would be back next year was the icing on the cake. See you next time boys, say hi to the chick rocking out and having a great time, like she always does at your shows.

More photos are on the Galleries page.

This site uses Akismet to reduce spam. Learn how your comment data is processed.